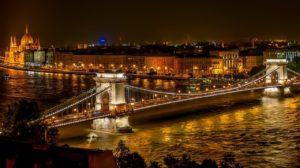 Budapest is the capital of Hungary and also its largest city. It has 1,9 million inhabitants, and has 23 administrative districts. Buda is hilly, Pest is flat, and the two are separated by the River Danube. Just a walk in the city will reveal why Budapest is often cited as one of the most beautiful cities in Europe. Its many inhabitants through the centuries have left an incredibly rich architectural heritage – you can find a Roman amphitheatre, Turkish baths, the neo-gothic Parliament House and many more within the city’s 529 km2. Its World Heritage Site includes the banks of the Danube, the Buda Castle Quarter, Andrássy Avenue, Heroes’ Square and the Millennium Underground Railway, the second oldest in the world (oldest on the continent).

Zeller Bistro (it is recommended to make a reservation in advance)

Made In Pasta (Italian)